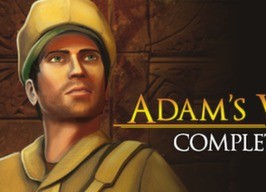 When Adam’s Venture came across our email, we thought it looked great and decided then and there that we should launch and launch with Adam’s Venture as our lead article. Why you ask? What’s so special besides a few great looking screen shots? Actually, I’m not sure. But something about it inspired us and, well, that’s hard to pin down into words. But we’ll try.

Over the last few months, several games were released that also exhibited some great artwork (Soma Games anyone?). The visual appeal of these games suggests strongly that Christian Game developers continue to grow and mature. In the case of Adam’s Venture, the makers used the Unreal 3 engine…and it shows.

But does a great screenshot translate into great game play? Not necessarily. But it does show that the makers of the game are trying to match the quality found in any modern game today. We think they’ve done an admirable job. In fact, the art was the hook that drew us in. 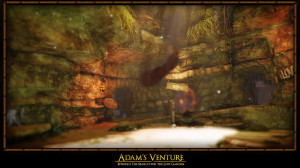 So, back to what Adam’s Venture is all about. This is a biblically themed adventure game that’s set in the 1930’s, a setting similar to the “Raiders of the Lost Ark.” Iceberg, the game’s publisher, describes it as a non-violent game which has “action oriented gameplay” filled with puzzles.

According to Iceberg, “During the game you encounter fragments from the Bible and, through a variety of puzzles, learn about common Christian values.”

Now, this isn’t Laura Croft running around with guns blazing. This is a straight up adventure game. Action without violence…what a concept. This is episode one and if it’s a commercial success, you can bet there will be many more such episodes in the future.

We can’t wait to get our hands on this game. If it plays as well as it looks, we are in for a treat. Below is a synopsis of what you can expect from the game.

Deciphering relics in an old Templar Church, Adam uncovers memoirs written long ago by a crusader who fought with Richard the Lion heart in the Holy lands. The memoirs tell of a mysterious place with labyrinths of caves and grottos guarding the headwaters of four great rivers. Could this place be the legendary Lost Garden of Eden? This discovery sets off a great adventure that will bring Adam through familiar places through the Holy Lands, accompanied by Professor Jacques Saint Omair, his Girlfriend Evelyn and his ever faithful Dog, the team embarks on an epic adventure fraught with mystery and intrigue and danger in their quest to find the legendary birth place of Humanity.

Taking to the Developers:

Vertigo Games is barely a year old. They don’t present themselves as a Christian Game company, but there’s a definite Christian vibe to the place. Besides Adam’s Venture, they also put out an iPhone app called, “What Would Jesus Say?”

Fortunately, we were able to ask them a few questions and we think you’ll enjoy their answers.

CG: Until Adam’s Venture found its way into our email, we had no idea that Iceberg or Vertigo games were working on a game of this type. Please introduce yourself, where you came from, what makes you unique, and what you hope to achieve in the Christian marketplace.
My name is Richard Stitselaar, creative director of Vertigo Games, a Dutch game studio located in the city of Rotterdam. Our company was founded when Coded Illusions, our former employer, got hit hard by the financial crisis. Coded Illusions had been working on a Christian-themed AAA title for over three years, and with Vertigo Games we’re trying to build on that experience. It’s our ambition to create high-quality games, and raise the bar for the Christian market.
CG: What is Adam’s Venture all about? Why did you choose this theme?
I’d say the first Adam’s Venture episode is all about temptation, and the struggle it takes to overcome this. This universal theme resonates throughout the story of creation from the book of Genesis, which has been the main inspiration for the story line and puzzles for this episode. Nevertheless we tried to incorporate the theme in a subtle way, avoiding the “in-your-face” approach in favor of “reading between the lines”.
CG: Adams’ Venture clearly raises the bar for quality graphics (and animation) in a Christian oriented game. What did it take to achieve that? How many developers were involved in the making of this game?
As usual, it took a lot of blood, sweat and tears. Though in our case, it was mostly sweat. The first episode was created when Vertigo Games was still growing as a company, so we called
in a lot of help on a work-for-hire basis from our network. I guess about 30 people contributed to its creation one way or another, with 8 of them being in-house at the time.
CG: Do you have the themes for future episodes planned out? If so, what are they?
The Adam’s Venture episodes will be released in series of three, whereas each series will tell a complete story. The main storyline of the first three episodes has indeed been decided upon, but unfortunately I’m not at liberty to discuss the other two episodes yet. One thing I can mention is that, whatever theme we choose, Biblical references and family values will remain a constant throughout the series.

CG: What other games that would fit well into the Christian Market do you have planned? I’m talking about games respectfully themed with content that’s of interest to Christians?
We’ve certainly got a few tricks left up our sleeves; one of them being a sci-fi adventure called ‘Nomos’, which is inspired upon the book of Revelations. For now, the Adam’s Venture series keeps us pretty occupied though. We feel it’s important to create subsequent episodes at regular intervals, whilst making sure we’re constantly improving ourselves. Trying to balance these contradicting forces tends to keep us pretty occupied.

So, there you have it. We’re excited about Adam’s Venture and pleased to find yet another studio dedicated to raising the level of excellence around Christian games. The future is looking bright indeed.

Click on the Image below to get Adam’s Venture Complete Pack!